Chemical kinetics - the area of chemistry that deals with rates of reactions.

Reaction rate - the change in concentration  of a reactant or a product of a chemical  reaction per unit time. 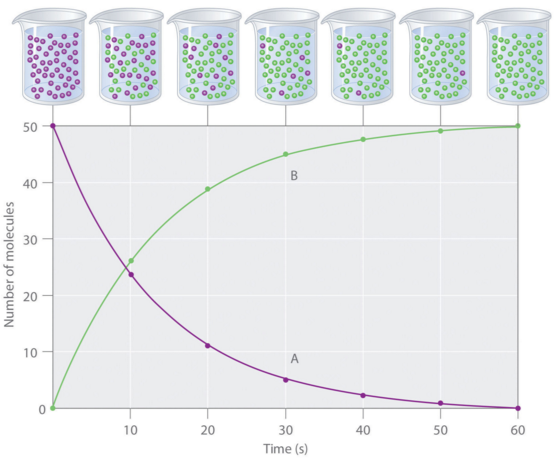 Average reaction rate (rateA) - the change in  reactant or product concentration over a  given time interval.

By convention, reaction rates are always expressed as positive values.

A way to determine the average rate of a reaction is by using data plotted on a graph.

The average rate of the reaction between two time points, t1 and t2 , is equal to the slope of the secant line drawn between points t1 and t2 on the x-axis of the graph:

where ∆y and ∆x are read from the values on the y-axis and the x-axis, respectively.

Concentration of a reactant, A, plotted as a function of time.

The average rate of disappearance of the reactant from point t1 to point t2 is the slope of the secant line.

A secant line is a line that intersects two points on a curve.

The slope of a line is a measure of how steep the line is relative to the horizontal axis.

Since the reaction rate changes with time and the rate may be different depending on which reactant or product is being studied, it is necessary to be very specific when describing a rate for a chemical reaction.

Instantaneous reaction rate - the rate of a  chemical reaction at a single point in time.

The instantaneous rate at any time t is equal to the slope of the tangent to the curve at that particular instant in time.

A tangent is a straight line that touches a curve at a single point and does not cross through the curve.

The instantaneous rates of reaction are given by the slopes of the tangents at the specific times of interest, in this case, t1 and t2.

For any chemical reaction, the reaction rate can be expressed in terms of any reactant or product, and all of these rates are related by the stoichiometric relationships found in the balanced chemical equation.

There are many factors that can affect the rate of a chemical reaction:

Collision theory - the theory that chemical  reactions can occur only if reactants  collide with proper orientation and with  enough kinetic energy to break reactant  bonds and form product bonds.

Some orientations for collisions between molecules or ions can lead to reactions while others cannot. This is sometimes called the collision geometry.

For a reaction to occur, the reactants must have sufficient kinetic energy.

The  minimum amount of energy a reactant entity must have for a collision to be effective  is called the activation energy (Ea).

You can think of activation energy as a potential energy hill or barrier.

In a chemical reaction, the potential energy is the energy stored in the bonds within and among the entities of the reactants, and the kinetic energy is their movement.

When entities collide in an appropriate orientation, a chemical reaction can only proceed if the kinetic energy is enough to break these bonds. This quantity of energy is the activation energy.

If the kinetic energy is sufficient, the bonds will rearrange to form the products.

The unstable arrangement of atoms  found at the top of the potential energy hill is called the activated complex, or transition state.

The activation energy represents the energy difference between reactants and the activated complex.

Temperature of the Reaction System

Experimental evidence shows that a relatively small increase in temperature seems to have a very large effect on reaction rate.

An increase of about 10°C will often double or triple the rate of a reaction.

Temperature is considered to be a measure of the average kinetic energy of a substance.

Therefore, in any sample of a substance at a given temperature, the individual entities in the sample will have different kinetic energies.

Some of the entities will therefore be moving more quickly than others, so only a proportion will have a quantity of kinetic energy that equals or exceeds the activation energy.

If you increase the temperature, the average kinetic energy of the entities increases.

As a result, more entities in the sample will have enough kinetic energy to break the bonds of the reactants and form an activation complex.

In addition, the increase in kinetic energy will also increase the rate and force of collisions between reactants, which will increase the probability that the collisions will be effective.

This is consistent with the theory that increases in temperature exponentially increase the probability of effective collisions.

For any reactant, the bond type, strength, and number determine the activation energy required for a successful collision.

The size and shape of a molecule or ion can also affect reaction rate. Some reactions involve complicated molecular substances or complex ions. These are often less reactive than smaller, less complex entities. This is in part because more bonds must be broken. However, it is also less likely that complex molecules or ions will collide in an orientation relative to each other that will be effective in allowing a reaction to occur.

Increasing of the concentration of a reactant, the probability of collisions between reactant molecules increases and a greater number of effective collisions is likely to occur. Therefore, the reaction rate will be expected to increase.

The entities in a solid structure have fewer potential collision sites than the same number of entities split into smaller bits, increasing the total surface area.

Catalyst - a substance that alters the rate of a chemical reaction without itself being permanently changed.

Biological catalyst - a catalyst made by a living system.

Heterogeneous catalyst - a catalyst in a reaction in which the reactants and the catalyst are in different physical states.

Homogeneous catalyst - a catalyst in a reaction in which the reactants and the catalyst are in the same physical state.

For any reaction to occur, the kinetic energy of colliding reactant entities must be equal to or greater than the activation energy.

However, catalysts do not increase the number of collisions between reactant entities, nor do they increase the kinetic energy of the entities of reactant(s). Instead, a catalyst provides an alternative pathway for the reaction, which has a lower activation energy.

Thus, at any given temperature, a larger fraction of the entities of the reactant(s) will have kinetic energy equal to or greater than this lower activation energy.

There is a greater number of effective collisions, and so the reaction rate is increased.

Rate law - the mathematical expression that allows calculation of reaction rate as a function of reactant concentration.

Consider the following equation for a chemical reaction:

A and B represent the reactants, and a and b are the coefficients used to balance the equation.

Experimental evidence has shown that the rate of a reaction is proportional to the product of the initial concentrations of the reactants, where each concentration is raised to some exponential value.

This can be expressed as:

This expression relates the reaction rate to the initial concentrations of reactants using exponents m and n.

Note that exponents in a rate law cannot be obtained from the balanced equation; they can only be determined experimentally.

It is possible to write the relationship between reactant concentrations and reaction rate as an equation:

The temperature must be kept constant in all runs of an investigation of a chemical reaction carried out to determine the rate law for that reaction.

Rate law equation - the relationship among rate, the rate constant, the initial concentrations of reactants, and the orders of reaction with respect to the reactants.

Rate constant - determined empirically and is unique for a single reaction at a specified temperature.

Each exponent in the rate law equation is called an order of reaction with respect to the particular reactant with which it is associated.

Order of reaction - the exponent used to describe the relationship between the initial concentration of a particular reactant and the rate of the reaction.

Total order of reaction - the sum of the exponents in the rate law equation.

The orders of reaction can be used to predict reaction rates. Suppose you are given this equation,

and are told that the experimental evidence gives the following rate law equation:

This equation tells us that the rate of the reaction is proportional to each of the initial concentrations of the reactants raised to a given power:

Since in this reaction the rate does not depend on the initial concentration of (C), it is possible to write the rate law equation as:

Chemists commonly use the method of initial rates to determine the rate law equation for a reaction.

The steps in the method of initial rates are as follows:

The concentrations of the products are not expressed in the rate law equation. Since we deal with the initial instantaneous rate, we do not worry about the products, because at this stage none or close to none have been formed.

A rate law equation establishes the specific mathematical relationship between the reaction rate for a given reaction and the concentrations of reactants at the start of the reaction.

The order of a reaction can be determined from the units of the rate constant, k. Rate is always measured in mol/(L·s). Therefore, a first-order reaction has the unit s–1 because

Inserting units for rate into this expression gives

Dividing both sides of this equation by (mol/L) gives

Therefore, k for a first-order reaction has units of s-1.

Balanced chemical equations provide an overall summary of a chemical reaction. They provide information about the types of reactants and products as well as their stoichiometric relationships. However, chemists think that most chemical reactions occur by a sequence of simpler reactions.

Reaction intermediate - an entity that is neither a reactant nor a product but is formed and consumed during the reaction sequence.