Structure and functions of 3 types of carbohydrates 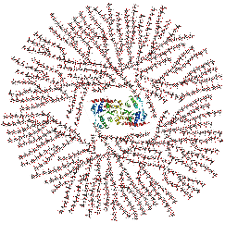 Carbohydrates, along with lipids, proteins, and nucleic acids, belong to 4 major macromolecules of life.

The main role of carbohydrates is to provide energy.

Living organisms use monosaccharides to fuel metabolic reactions. They produce ATP in a process of aerobic cellular respiration.

Stored form of carbohydrates is polysaccharides such as starch and glycogen.

Besides this base task - to serve as a source of energy, carbohydrates are irreplaceable for other cell functions.

In the human body, carbohydrates function as part of hormones such as follicle-stimulating hormone and luteinizing hormone.

Monosaccharides - ribose and deoxyribose - are important parts of nucleotides, which are building blocks of DNA and RNA.

General formula of carbohydrates can be represented by the stoichiometric formula (CH2O)n, where n is the number of carbons in the molecule.

In carbohydrate molecules the ratio of carbon to hydrogen to oxygen is 1:2:1.

There are 3 different types of carbohydrates: 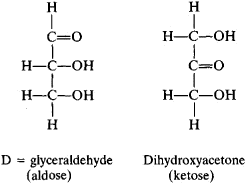 Most monosaccharide names end with the suffix -ose.

In monosaccharides, the number of carbons usually ranges from three to seven.

Depending on the number of carbons in the sugar, they also may be known as trioses (three carbons), pentoses (five carbons), and hexoses (six carbons).

The two simplest monomers of carbohydrates are: 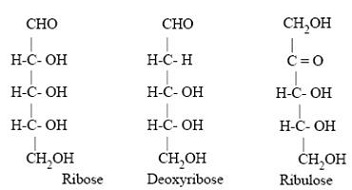 Although glucose, galactose, and fructose all have the same chemical formula (C6H12O6), they differ structurally and chemically (and are known as isomers) because of the different arrangement of functional groups around the asymmetric carbon; all of these monosaccharides have more than one asymmetric carbon. 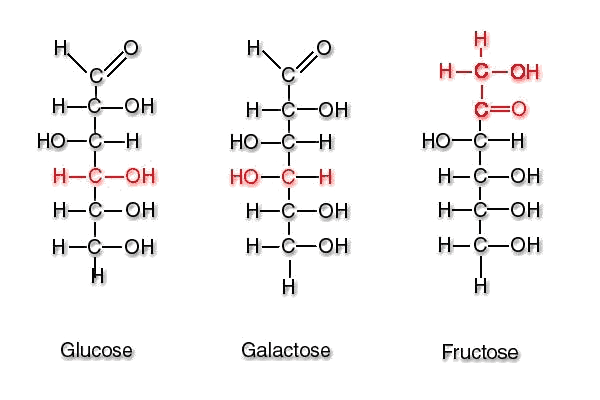 Monosaccharides can exist as a linear chain or as ring-shaped molecules; in aqueous solutions they are usually found in ring forms.

Ring forms of monosaccharides serve as a monomer of carbohydrate polymers.

When a glucose molecule forms a six-membered ring, there is a 50 percent chance that the hydroxyl group at carbon one will end up below the plane of the ring.

Thus the ring structure of glucose can have two different arrangements of the hydroxyl group (-OH) around the anomeric carbon.

The anomeric carbon - carbon 1 that becomes asymmetric in the process of ring formation, stereocenter.

Oligosaccharides are second type of carbohydrates.

Glycosidic bonds can be of the alpha or the beta type.

Examples of important disaсcharides are:

Chemical structure of maltose is composed of two α - ring structures of glucose molecules held together by a 1-4 glycosidic linkage.

Maltose can be found in grains which is used in the production of beer.

Sucrose is the most known as common table sugar.

Lactose is normally found in milk.

Some complex carbohydrate polymers are straight chains, and some are branched.

Starch, glycogen, cellulose, and chitin are primary examples of polysaccharides.

Starch is the stored form of carbohydrate polymers in plants and is made up of a mixture of amylose and amylopectin (both polymers of glucose).

Starch is made up of monomer of carbohydrates - glucose that are joined by α 1-4 or α 1-6 glycosidic bonds.

The numbers 1-4 and 1-6 refer to the carbon number of the two residues that have joined to form the bond.

Amylose is starch formed by unbranched chains of glucose monomers (only α 1-4 linkages), whereas amylopectin is a branched polysaccharide (α 1-6 linkages at the branch points).

Glycogen is the storage form of glucose in humans and other vertebrates and is made up of monomers of glucose.

Cellulose is the primary structural polysaccharide in all plants, and is a major component in cell walls. It is a straight chain polymer of β - ring structure of glucose that is held together by 1-4 glycosidic linkages.

Every other glucose monomer in cellulose is flipped over, and the monomers are packed tightly as extended long chains. This gives cellulose its rigidity and high tensile strength - which is so important to plant cells.

While the β 1-4 linkage cannot be broken down by human digestive enzymes, herbivores such as cows, koalas, buffalos, and horses are able, with the help of the specialized flora in their stomach, to digest plant material that is rich in cellulose and use it as a food source.

A cellulose-like polymer exists in the hard exoskeleton of insects, crustaceans. This polymer is known as chitin, which is a polysaccharide-containing nitrogen.

It is made of repeating units of N-acetyl-β-d-glucosamine, a modified monomer of carbohydrates - glucose.

Chitin is also a major component of fungal cell walls.

Fungi are neither animals nor plants and form a kingdom of their own in the domain Eukarya.